How does SILLE work?

Synthetic Aperture Radar Interferometry (InSAR) is the main technology for space based ground motion measurement. It has been in use for more than 25 years. Early applications and demonstrations using pairs of images showed the significant displacement caused by earthquakes.

In the late 1990s, a new suite of multi-image InSAR techniques were developed that revealed movements of millimeters per year. The application of these techniques was made possible by the unique archive of radar images acquired by the ERS-1 and -2 satellites beginning in 1992. These satellites acquired images in a consistent geometry as often as every 35 days.

Other civilian SAR satellites followed, including Radarsat-1 and -2, and ENVISAT, as well as a number of high-resolution commercial SAR systems.

Building on the success of many InSAR demonstration studies, a number of initiatives emerged to streamline the efforts. In particular the TerraFirma project (2003-2014), PanGeo (2011-1014); the Italian Piano Straodinario di telerilevamento Ambientale (2008-2016); as well as a number of spin-off projects building on top of TerraFirma and PanGeo, including SubCoast, EVOSS, and Lampre.

The common denominator in all these initiatives was to streamline independent activities into a unified prototype service, albeit with different target audiences. The focus was both on algorithmic and operational developments, as well as validation activities.

Nevertheless, many of these initiatives were faced with a major operation limitation due to lack of systematic source of radar images and hampered by inherent restrictions of the satellite acquisition modes.

The result was that it required several years of image acquisitions in order to obtain reliable InSAR results. This meant that the data was usually only processed one time and not regularly updated.

Now, thanks to the Copernicus programme, all the right ingredients are available for introducing and operating a radar-based service, including a free and open data policy, the long-term, predictable operations of the Sentinel-1 mission, high performance computational environments and the algorithmic know-how.

The Sentinel-1 satellites provide a unique new opportunity to provide dynamically updated ground motion datasets. It is possible to monitor hazardous processes and see the effects of remediation efforts.

Flight-schedule of satellites and data coverage

Sentinel-1, carried out by the European Space Agency Copernicus Programme, is a space mission designed as a two-satellite constellation. This means that two satellites, Sentinel-1A and Sentinel-1B, share the same orbit - but 180 degrees apart. While one satellite can orbit the Earth in 12 days, both satellites operating together provide a 6-day repeat cycle. Areas around the equator see the satellite repeat in just three days, Europe and Canada in less than three days, and Arctic areas in less than one day.

Considering the Sentinel-1 and 2 flight schedule, we can't assure same data covergae and regularity for the whole world. Revisit and coverage frequency limitations are shown on the map below: 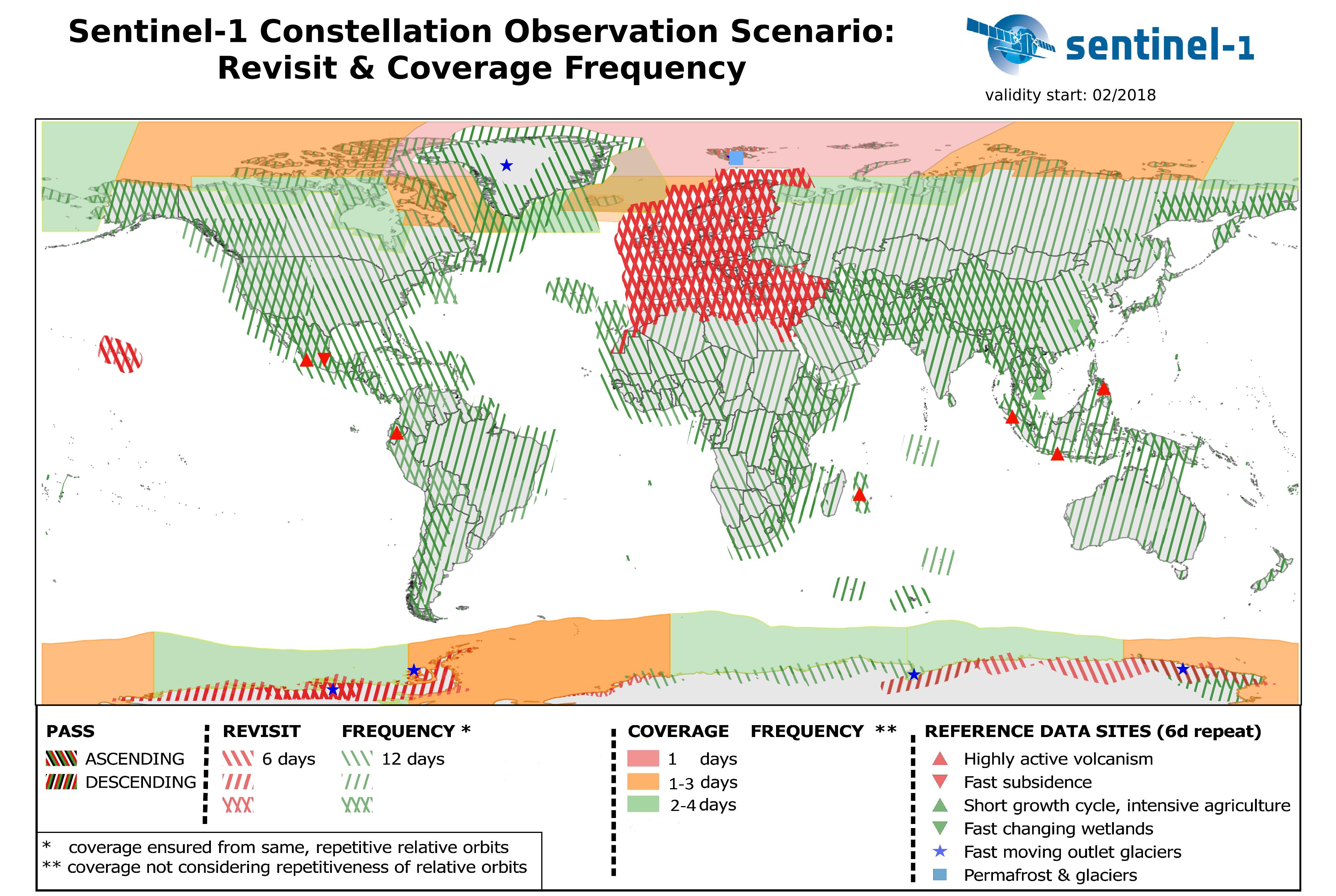 What is point cloud density and why is it important?

A point cloud is a set of data points in an area of measurement. Point density describes the number of points in an area of measurement.  Therefore, the higher the point cloud density, the more data or information is available in the measured area. Higher point density means you will get a more detailed image because there is more information available.

Differences between LiDAR and SAR

LiDAR requires an aircraft flight making it a costly option and weather dependent. SAR technology is acquired through an orbiting satellite that is more cost effective and can penetrate through cloud coverage. Both are able to acquire images during day or night. LiDAR provides very high-resolution data allowing detection of forest density or minor construction flaws. SAR observes the progression of surface deformation by utilizing multiple data sets of the same area over time.

Differences between GPS and SAR

SAR and GPS can often work in tandem, complementing an overall effort to keep public and private infrastructure closely monitored and stable. While GPS can produce daily analysis of an specified area, SAR is able to give comparisons of historic and current data to offer displacement data over time. This can serve as necessary information when deciding to utilize more costly measurement options.

What objects can be succesfully monitored with SAR?

SAR can be used to monitor objects that have good reflection. Usually these are buildings, railroads, bridges, bare land, rocks, docks, piers, dams and other human built objects. Bare slopes can be also monitored for falling rocks and landslides, as well as landslides. The ideal objects to monitor using SAR include a rough surface, like concrete, rock, or metal, and have many corners, which reflect very well. However, objects made from wood or other non-reflective surfaces, long suspension bridges and other small objects are not ideal for SAR to monitor.

What does SAR do?

Interferometric synthetic aperture radar (InSAR) is a space-borne (or, alternatively, airborne) microwave imaging system that can be used to generate maps of ground deformation. Ground deformation is the movement of the Earth’s surface caused by seismic strain, landslides, and mining or landfill activities.

SAR can provide a historical analysis of ground movement that can be used for infrastructure monitoring. Acquiring frequent (bi-monthly) infrastructure displacement measurements can serve as an early warning system for possible infrastructure malfunction or failure. This allows prioritization of vehicle- and person-based inspections, thus reducing cost and increasing efficiency of maintenance planning.

How does it work?

Output of the application

Basic displacement information provided by the service is the satellite line-of-sight (LOS), with projected to ground geometry and quality measures pe...

Synthetic Aperture Radar Interferometry (InSAR) is the main technology for space based ground motion measurement. It has been in use for more than 25 ...